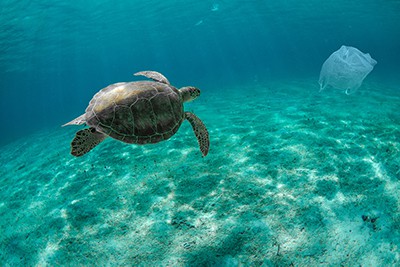 The San Juan Bay Estuary (SJBE) system is a highly diverse one. It houses more than 160 bird species, 308 plant species, 87 fish species and 20 different species of amphibians and reptiles. Of these, 16 species are considered critical elements that are species of flora and fauna — rare and unique in Puerto Rico — that are vulnerable or in danger of extinction. We can mention the ladybug, the “palometa” and the peregrine falcon among the group of birds, the black “Cobana” tree and some reptiles such as the “tinglar” and the tortoises that use the sandy beaches in the area of Vacía Talega in Piñones to deposit their eggs during the reproductive season. Some 300 species of wetland plants are found in the Estuary.

The Bay of San Juan Estuary Program sponsors an annual bird census known as the Christmas Bird Census. These data are used to study the population patterns and dynamics of the birds that inhabit the SJBE over time. It should be noted that birdwatching is the fastest growing recreational activity in the world. In addition, it generates an industry of approximately $25 billion per year among the United States, Canada and Mexico. The Estuary, with more than 160 species of birds reported, seeks to encourage this type of industry, particularly during the winter. That is the season when more species of birds are observed and coincides with our island’s tourist season. Of course, this type of industry depends on good management and conservation of natural resources.

The SJBE’s fish have an economic and recreational importance as it is the case with “catch and release” type shad fish in the San José Lagoon. This type of fishing consists of catching the fish, after having enjoyed the “fight,” and culminates by releasing it back into its habitat without causing harm. Annually, more than 1,200 tourists visit Puerto Rico, specifically the SJBE, to enjoy this sport. This implies that sport fishing in the SJBE could be contributing about $ 1.5 million per year to the local economy.

Undoubtedly, wildlife is a determining component of that great ecosystem of which human beings are also part. However, consciously or unconsciously, we degrade and destroy their habitats through pollution and other disruptions related to our daily lives. These are some of the main causes that affect the diversity and abundance of our flora and fauna species.

More than 160 bird species, 124 fish species and 19 reptile and amphibian species have been reported (identified/observed) within the San Juan Bay Estuary.

The destruction and degradation of habitats, pollution and other disturbances related to humans are some of the main causes that affect the diversity and abundance of our flora and fauna species.

Many of the actions of our Comprehensive Management Plan are aimed at improving and maintaining this ecosystem. Their purpose is to support an optimal diversity of flora and fauna, while allowing the recreational use of their resources.

There are more than 300 species of wetland plants in the Estuary. These extend along coastal, aquatic, and marine habitats.

There are four mangrove species in the Estuary.

Mangroves provide a number of benefits, among which are the protection of coasts against waves and erosion. Moreover, they are feeding, mating, nesting and resting areas for birds, crustaceans and reptiles.

The introduction of exotic species — which may eventually become invasive and harmful — is considered one of the greatest threats to global biodiversity. This is due to the fact that invasive species compete for space and food, and in some cases depredate the native species intensively.

Three invasive species associated with aquatic ecosystems have been identified in the SJBE. These are the green iguana or “gallina de palo” (Iguana iguana), the alligator (Cayman cocrodilus) and the lionfish (Pterois volitans).

To control these invasive species, the SJBE Program is heading a specific action aimed at:

Through the implementation of this action, there is no doubt that, in the long term, healthy and resilient estuarine ecosystems will be achieved in the face of climate change.

Some of the ecosystems found in the Estuary are mudflats, swamps, mangroves, seagrasses, coral communities, and sandy beaches. These house very rich and diverse biological communities.

Herbaceous wetlands or bogs provide a critical breeding habitat for a variety of fish and invertebrate species. They are also feeding and nesting areas for a great diversity of birds. One of the most important herbaceous wetlands in the Estuary is Ciénaga Las Cucharillas, located in the municipality of Cataño.

The largest mangrove forest in Puerto Rico is located in the SJBE and is part of the Piñones State Forest Nature Reserve.

The mangrove is a tree able to protect the coasts from strong waves, keep the water clean, promote fisheries, be a source of medications, allow the development of coral reefs and sustain a diversity of birds and other creatures — all at once. This is not to mention that it controls floods and promotes recreational and even scientific activities. Particularly, the red mangrove (Rhizophora mangle), is a tree that lives on the border between the terrestrial world and the aquatic one.

The submerged roots of the red mangrove provide one of the most important and curious habitats known in the marine world. In fact, they are considered the nursery of tropical seas. That’s because more than 80% of the fish that live on coral reefs and other deep marine environments spend part of their youth protecting themselves and feeding among their roots. In this way, they sustain a diversity of species and benefit fisheries in tropical seas.

As if that were not enough, the mangroves improve the quality of the waters on the coast because their roots act as natural traps that retain sediments. In addition, they control contaminants such as pesticides and excess nutrients, before they reach the ocean. By improving the quality of the waters on the coast, mangroves allow the development of communities such as coral reefs and marine grasslands that depend on clear waters to survive. In addition to retaining the sediments, they cushion the strong waves and protect the coast from erosion. For example, the energy of a wave can be reduced by 75% by going through a 200-meter strip of mangrove.

However, there was and still is the idea that mangroves, aside from being smelly, are breeding grounds for mosquitoes and disease outbreaks. So much so, that Joint Resolution 7 of May 13, 1927 authorized the Government of Puerto Rico to sell mangroves of the people of Puerto Rico to be dried out, because these were considered “highly detrimental to health, for being mosquito breeding sites and consequently a focus of malaria and other diseases and unproductive lands.” It took 78 years for the mangroves to be recognized as relevant. This recognition was reflected in Law 60 of Aug. 20, 2005, which allows the protection of mangroves and other wetlands.

Aware of the importance of mangroves, the San Juan Bay Estuary Program, with the help of volunteers and collaborators has planted about 3,000 red mangrove seedlings. And it has done it in places where the mangrove was destroyed, such as at the Condado Lagoon and Peninsula La Esperanza in Cataño.

Seagrasses are aquatic plants that produce flowers and submerged seeds that form extensive meadows on the seabed. These provide habitat for many fish of economic and recreational importance, as well as food for endangered species.

Coral communities and related habitats are found mainly at the connections to the ocean at the Bay of San Juan and the Laguna del Condado. The latter is the lagoon with the greatest aquatic biodiversity in the Estuary system.

To improve aquatic communities, the San Juan Bay Estuary Program placed 45 artificial reef modules at the bottom of the Condado Lagoon. These modules, known as “Taíno Reefs,” create new habitats on the seabed, as they mimic the coral reefs structures. Each module contains multiple fish access entries. On the other hand, the outer surface provides the foundation for the recruitment of corals. Once installed, the ecological response is surprising. For example, the quantity and diversity of fish increased at nine months. This was confirmed by 176 individuals distributed in 35 species that did not exist before the artificial reefs. Moreover, a whole community that interacted was observed. Fish feeding on algae growing on the surface of the modules were observed; while other took refuge inside them. Some predators — such as horse mackerel and barracuda — were also seen while capturing their prey at their smallest neglect. As if that were not enough, at six months the first colonies of growing coral were observed. At present, more than 1,200 coral colonies grow on these structures.

The creation of marine habitat, to increase marine biodiversity and stimulate coral growth, was the core purpose of this project. But, in addition, these artificial reefs form an interpretive underwater path. With the right equipment, people can observe fish, corals and other marine creatures in their natural environment. This way, it is possible to increase the level of knowledge, as well as to foster positive attitudes toward the conservation of the marine world.

Nature is probably going through its most critical moment. It is imperative then that, to conserve and protect it, we intervene through the appropriate and prudent use of technology. Although we can never replace their processes, we can create the right conditions that allow them to restore themselves.

The Estuary’s sandy beaches are located on the La Esperanza Peninsula, the eastern shore of Isla de Cabras, La Puntilla, Condado Lagoon, Ocean Park, Isla Verde, Piñones and Vacía Talega. These are one of the most important resources for the Estuary’s tourism industry of and public recreation. These, in addition to hosting a number of marine species, are areas of sea turtle nesting.

The dunes are large accumulations of sand on the beach that act as barriers that protect us from the strong ocean waves. They store sand that they then release to form the beaches that we enjoy so much. Without dunes there are no beaches!

Considered coastal ecosystems, the dunes act as shelter and source of food for plants and creatures such as the hermit crab. Some plants found in the dunes are the beach grape (Coccoloba uvifera), the beach vine (Ipomea sp) and the “yerba de sal” (Spartina). In turn, the plants are very important for the dune, because they trap the sand that comes with the wind and make it grow.

Due to its importance, the San Juan Bay Estuary Program organizes and implements dune restoration and creation projects in different points of the metropolitan coastline. These projects consist of the placement of sand retaining systems, and the planting of coastal vegetation such as the beach vine (Ipomea), the beach grape (Coccoloba uvifera) and the “yerba de sal” (Spartina).

These efforts are carried out with community residents. They become scientific citizens and contribute with their commitment, dedication and time. Undoubtedly, they are the true heroes of restoration…the necessary balance.

In addition, the trees impart beauty and aesthetic value to the environment, provide habitat for wildlife, and reduce city noise.

We invite you to continue reading the interesting information in our website. You will learn in detail everything that comprises the singular and marvelous natural resource that is the San Juan Bay Estuary, and the efforts for its restoration, protection and maintenance that the PEBSJ is conducting.

The San Juan Bay Estuary Program is a 501c3 nonprofit corporation that designs, implements and tracks restoration actions to improve water quality and associated ecosystems within the San Juan Bay Estuary system and its basin. The program involves citizens, visitors and tourists, and is associated with the governmental, private, scientific, academic and community sectors.